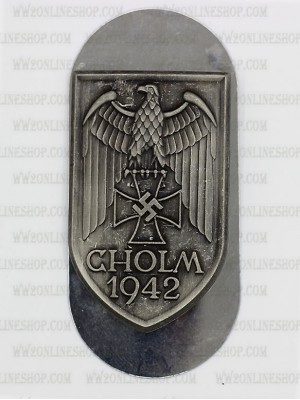 The Cholm Shield (German: Cholmschild) was a World War II German military decoration awarded to those who fought in the Cholm Pocket between 21 January and 5 May 1942.[1] It was instituted on 1 July 1942 and is the rarest of the German combat shields with the fewest recipients of approximately 5,500.

In January 1942, the Soviet Red Army began a series of counteroffensives against the German Army. In the course of these operations, the German occupied city of Cholm was attacked on 18 January 1942. By the 21 January the city was surrounded and cut off which lead to a siege of the German forces. Led by Generalleutnant Theodor Scherer a mixed group of Wehrmacht, Luftwaffe and police personnel were supplied by air until they were relieved on 5 May 1942.

After the relief of Cholm, a design for a commemorative shield was produced by Generalleutnant Theodor Scherer and Polizei-Rottwachtmeister Schlimmer and sent to Adolf Hitler for approval. The design was altered by Professor Dr Richard Klein before production began to ensure the eagle faced forward (when attached to the left sleeve) and to reduce the size slightly to 38 mm (1.5 in) by 65 mm (2.6 in).[2]

The award features the outline of a shield with a large Wehrmacht-style eagle with down-folded wings grasping an Iron Cross with a swastika at its centre. Below this in capital letters is written CHOLM and then the date 1942.[3] In 1957, the Cholm Shield was denazified (removal of the swastika) to allow recipients to wear the shield on their uniform.

All shields were hollow struck and slightly concave to fit better on the sleeve of the uniform. Various manufacturers used varying metals when producing the shields and they can be found in earlier stamped white iron versions which are magnetic and latter shields in zinc, both versions were washed in silver. A backing plate was attached to the shield with a number of prongs and in-between these was placed a piece of coloured cloth to denote branch of service:

To receive the shield, military personnel had to:

Have served honourably within the Cholm Pocket between the specified dates; or
Have been wounded in the campaign; or
Have flown and landed at the airfield within the pocket
Soldiers and airmen could submit an application for a shield and this was ended on 30 January 1944. All recipients received a copy of war correspondent Richard Muck's 1943 book Battle Group Scherer - cut off for 105 days.

The Cholm Shield was worn on the left upper arm of the uniform and also on all uniforms of the party and the state. For civilian clothes a smaller shield roughly 16mm across with a needle fitting could be worn on the left lapel. Soldiers with multiple campaign shields (for example Crimea Shield or Narvik Shield) would place the shield one above the other separated by half a cm. Holders of three campaign shields would have Narvik first with then the Cholm and Crimea beside each other below.
Tags: cholm, shield, (german:, cholmschild), wwii, badges 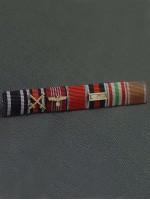