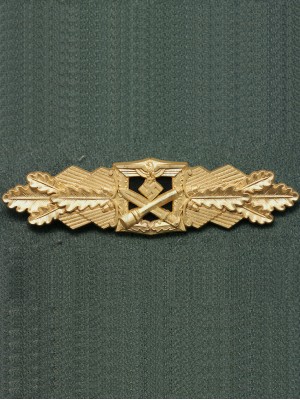 In 1944 a version for the German Air Force was created to note the increasing number of Air Force personnel and paratroopers taking part in direct combat.[3]

The decoration was designed by the military artist Wilhelm Ernst Peekhaus. The reverse of many of the awards features FEC.W.E.Peekhaus Berlin where FEC short for the Latin word "Fecit" meaning made by, followed by W.E.Peekhaus and Berlin. On the right side the manufacturer's logo or name. The badge was die-cast and made mainly of zinc. Depending on the manufacturer the clasp is either straight or slightly curved and measures between 95mm to 97mm wide. Towards the war's end production quality fell and these badges often use poorer quality metals and workmanship than earlier produced pieces.

The design features a central motif consisting of the national emblem of eagle and swastika surmounting a crossed bayonet and stick grenade. The centerpiece was cut out and backed with a thin, flat square steel, crimped in place on the reverse. The gold and silver awards were often plated in the same metal, whilst the bronze badge was lacquered with a composition called brennlack, which was a powdered metal. When oven heated the paint was burned, leaving a metallic type coating that will flake off with time. The pins are normally wider in the center, tapering at the ends. The weight could be anything between 24 and 37 grams depending on the metal used.[4]

Due to the manufacturing process it is sometimes difficult to identify the exact class of some awards. This has been caused by chemical discoloration between the zinc base metal of the clasp and whatever process was used to apply the original colour wash. 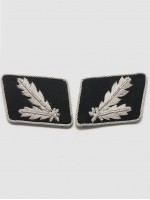 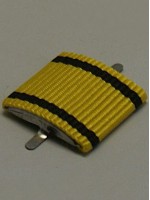 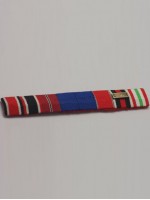