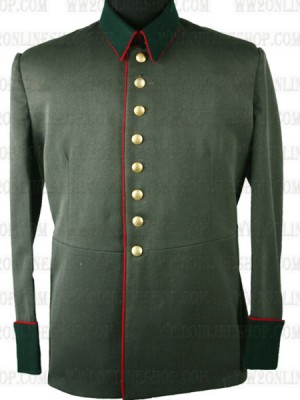 The Waffenrock (military coat) was descended from that introduced by the Prussian Army in 1842 and rapidly adopted by the other German states. In its Wehrmacht form as issued in 1935, it was a formfitting thigh-length eight-button tunic of fine feldgrau wool, without external pockets. The collar was taller than the service tunic and bore more elaborate Litzen, embroidered all in silver-white and mounted on Waffenfarbe backing; smaller Ärmelpatten, similar in appearance to Litzen, appeared under the buttons on the dark-green Swedish cuffs. Waffenfarbe piping also edged the collar, cuffs, front closure, and scalloped rear vent.

Officers wore a formal belt of silver braid. Trousers were steingrau, with the outer seams piped in Waffenfarbe. In the full-dress uniform (grosser Gesellschaftanzug) the Waffenrock was worn with medals, aiguillette (officers), trousers and shoes, the Schirmmutze, gloves, and sword (officers/senior NCOs) or dress bayonet (enlisted). Parade dress substituted the steel helmet and jackboots. Semi-formal (kleiner Gesellschaftanzug) and walking-out (Ausgangsanzug) uniforms were as full-dress, but without aiguillette and with ribbons replacing medals.

Production and issue of the Waffenrock was suspended in 1940, and either the service or the officers' ornamented uniform was worn for dress occasions instead. However, the Waffenrock remained authorized for walking out for those who had or could purchase it; and it was a widespread if unauthorized practice to loan a soldier a Waffenrock from regimental stocks to get married in, as evidenced by many wartime wedding photos.
Tags: german, wwii, general, m35, waffenrock, tunic, uniforms 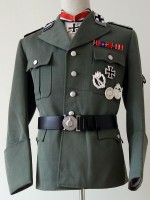 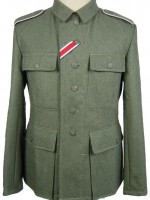 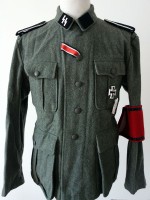 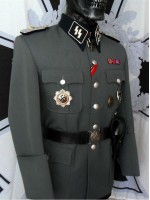 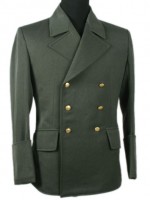 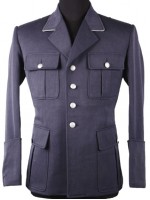 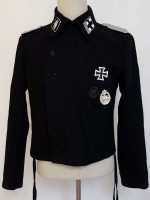 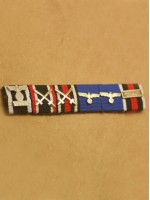 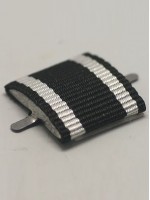