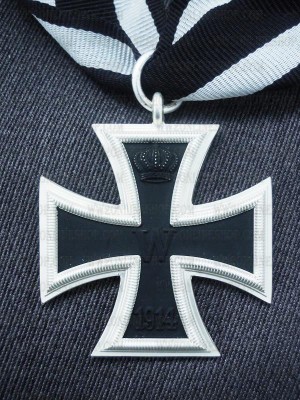 The Iron Cross (German: About this sound Eisernes Kreuz (help·info)) is a cross symbol typically in black with a white or silver outline that originated after 1219 when the Kingdom of Jerusalem granted the Teutonic Order the right to combine the Teutonic Black Cross placed above a silver Cross of Jerusalem.[1]

The Iron Cross is a black four-pointed cross with white trim, with the arms widening toward the ends, similar to a cross pattée. Frederick William III commissioned the neoclassical architect Karl Friedrich Schinkel to design the Iron Cross after a royal sketch.[2] It reflects the cross borne by the Teutonic Knights in the 14th century.

The ribbon for the 1813, 1870 and 1914 Iron Cross (2nd Class) was black with two thin white bands, the colors of Prussia. The non-combatant version of this award had the same medal, but the black and white colors on the ribbon were reversed. The ribbon color for the 1939 EKII was black/white/red/white/black.

Since the Iron Cross was issued over several different periods of German history, it was annotated with the year indicating the era in which it was issued. For example, an Iron Cross from World War I bears the year "1914", while the same decoration from World War II is annotated "1939". The reverse of the 1870, 1914 and 1939 series of Iron Crosses have the year "1813" appearing on the lower arm, symbolizing the year the award was created. The 1813 decoration also has the initials "FW" for King Frederick William III, while the next two have a "W" for the respective kaisers, Wilhelm I and Wilhelm II. The final version shows a swastika. There was also the "1957" issue, a replacement medal for holders of the 1939 series which substituted an oakleaf cluster for the banned swastika.

When the Iron Cross was reauthorized for World War I in 1914, it was possible for individuals who had previously been awarded an 1870 Iron Cross to be subsequently awarded another Iron Cross. These recipients were recognized with the award of the 1914 clasp featuring a miniaturized 1914 Iron Cross on a metal bar.[3] It was also possible for a holder of the 1914 Iron Cross to be awarded a second or higher grade of the 1939 Iron Cross. In such cases, a "1939 Clasp" (Spange) would be worn on the original 1914 Iron Cross. (A similar award was made in 1914 but was quite rare, since there were few in service who held the 1870 Iron Cross.) For the 1st Class award, the Spange appears as an eagle with the date "1939" that was pinned above the Cross. Although they are two separate awards, in some cases the holders soldered them together.

A cross has been the symbol of Germany's armed forces (now the Bundeswehr) since 1871.

During World War I, approximately 218,000 EKIs, 5,196,000 EKIIs and 13,000 non-combatant EKIIs were awarded. Exact numbers of awards are not known, since the Prussian military archives were destroyed during World War II. The multitude of awards reduced the status and reputation of the decoration. Among the holders of the 1914 Iron Cross 2nd Class and 1st Class was Adolf Hitler, who held the rank of Gefreiter. Hitler can be seen wearing his EKI on his left breast, as was standard, in most photographs.
Tags: first, war, 1914, german, iron, cross, 2nd, class, wwi, medals, awards 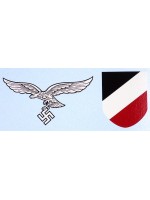 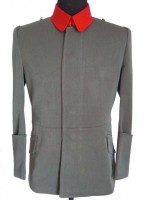 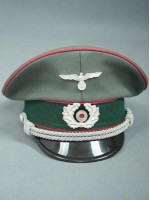