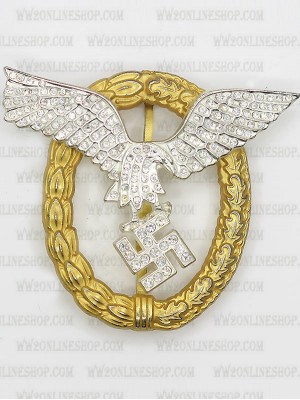 Replica of Pilot/Observer Badge in Gold with Diamonds

Pilot/Observer Badge in Gold with Diamonds

The Pilot/Observer Badge (German: Flugzeugführer- und Beobachterabzeichen) was a World War II German military decoration awarded to Luftwaffe service personnel who had already been awarded the Pilot's Badge or Observer Badge. It was instituted on 26 March, 1936 by the Commander in Chief of the Luftwaffe Hermann Göring. It was worn on the lower part of the left breast pocket of the service tunic, underneath the Iron Cross 1st Class if awarded.

The exclusive variant of the Pilot/Observer Badge in Gold with Diamonds was never officially instituted. It was bestowed to honour exceptional achievement and on rare occasions as an honorary award. The first recipients were General Walther Wever, Chief of the Luftwaffe General Staff and General der Flieger Erhard Milch, State Secretary of the Reichsluftfahrtministerium on 11 November 1935.
Tags: pilot/observer, badge, gold, with, diamonds, wwii, german, badges 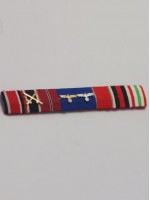 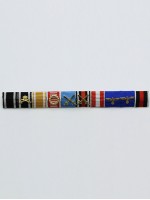 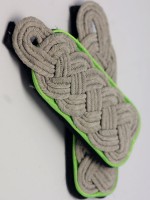