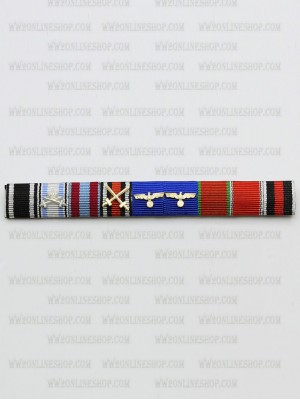 Please contact us to custom made a German Ribbon Bar for you!
Just send us the photo of the ribbon bar to us!
email: [email protected]

Eduard Wolrath Christian Dietl (21 July 1890 – 23 June 1944) was a German general of World War II. He was born in Bad Aibling, Bavaria. He was also a recipient of the Knight's Cross of the Iron Cross with Oak Leaves and Swords, awarded to recognise extreme battlefield bravery or successful military leadership.

Eduard Dietl was the son of a Bavarian finance official.[1] In 1909, at his second attempt to join the 5. Bavarian Infanterie Regiment, he entered as an officer cadet. After studying at the Kriegschule in Munich, he was commissioned Leutnant in October 1911. In October 1915 he was promoted to Oberleutnant and served as a company commander with his regiment. In March 1918, he was promoted to Hauptmann. He was wounded four times during his actions in the First World War. He joined the DAP (Deutsche Arbeiter Partei) and Freikorps of Franz Ritter von Epp in 1919. Dietl was prepared with his company on 9 November 1923 to support Adolf Hitler and the rebels in the Beer Hall Putsch. However it did not come to an intervention.

Dietl continued to serve in the German Army and, as a Generalmajor, he helped organise the 1936 Winter Olympics held at Garmisch-Partenkirchen.[2]

Dietl commanded the German 3rd Mountain Division that participated in the German invasion of Norway on 9 and 10 April 1940. Most of this division was landed at Narvik by a German naval force of ten destroyers, commanded by Commodore Friedrich Bonte, on 9 April 1940. British naval forces led by the battleship HMS Warspite destroyed all ten destroyers that had ferried Dietl's troops to Narvik and managed to recapture the town. Dietl's mountaineers withdrew into the hills and later retook the town when Britain abandoned her efforts to evict the Germans from Norway due to German success on the Western Front (the Franco-German border, Luxembourg, Belgium and the Netherlands).

A convinced Nazi and one of Hitler's favourite generals, he was the first German soldier to receive, on 19 June 1940, the oak leaves cluster to the Knight's Cross of the Iron Cross. Dietl was also popular among his men and his Finnish allies.[3]

Dietl subsequently commanded German forces in Norway and northern Finland and in Eastern Europe and rose to the rank of Generaloberst (equivalent to a Commonwealth General or a US four-star general), commanding the 20th Mountain Army on the northern Eastern Front, where the results of the German Arctic campaign were disappointing. Dietl initially turned down his promotion, but was convinced to accept the appointment by Generaloberst Alfred Jodl.[3] On 23 June 1944, a Junkers Ju 52 aircraft carrying Dietl, General der Infanterie Thomas-Emil von Wickede, General der Gebirgstruppe Karl Eglseer, Generalleutnant Franz Rossi and three other passengers crashed in the vicinity of the small village of Rettenegg, Styria; there were no survivors.
Tags: eduard, wolrath, christian, dietl, ribbon, bar, german, bars 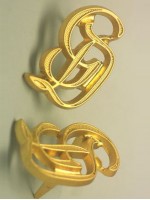 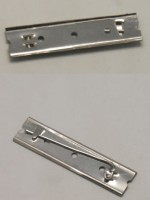