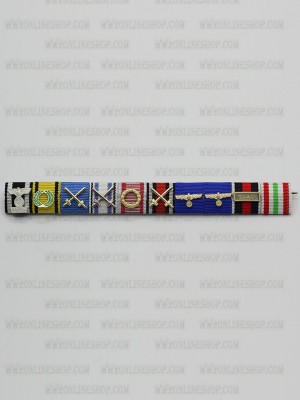 Please contact us to custom made a German Ribbon Bar for you!
Just send us the photo of the ribbon bar to us!
email: [email protected]
Erwin Johannes Eugen Rommel (15 November 1891 – 14 October 1944), popularly known as the Desert Fox (Wüstenfuchs, About this sound listen (help·info)), was a German field marshal of World War II. He earned the respect of both his own troops and his enemies.[1][2]

Rommel was a highly decorated officer in World War I and was awarded the Pour le Mérite for his exploits on the Italian Front. In World War II, he further distinguished himself as the commander of the 7th Panzer Division during the 1940 invasion of France. His leadership of German and Italian forces in the North African campaign established him as one of the most able commanders of the war, and earned him the appellation of the Desert Fox. He is regarded as one of the most skilled commanders of desert warfare in the conflict.[3] He later commanded the German forces opposing the Allied cross-channel invasion of Normandy. His assignments never took him to the Eastern Front.

Rommel is regarded as having been a humane and professional officer.[4] His Afrika Korps was never accused of war crimes, and Allied soldiers captured during his Africa campaign were reported to have been treated humanely.[5] Orders to kill Jewish soldiers, civilians and captured commandos were ignored.[6] Later in the war, Rommel was linked to the conspiracy to assassinate Adolf Hitler. Because Rommel was a national hero, Hitler desired to eliminate him quietly. He forced Rommel to commit suicide with a cyanide pill, in return for assurances that Rommel's family would not be persecuted following his death. He was given a state funeral, and it was announced that Rommel had succumbed to his injuries from an earlier strafing of his staff car in Normandy.
Tags: field, marshal, erwin, johannes, eugen, rommel, ribbon, bar, german, bars 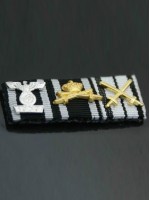 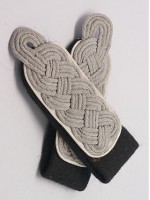 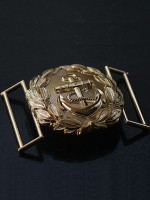 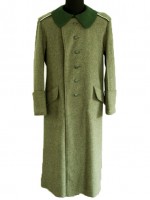